In 2021, the Peace Committee of Soka Gakkai Japan launched a new initiative, “SDGs Online Cinema Series” to raise awareness of the Sustainable Development Goals (SDGs). The initiative is an online screening of films related to the SDGs, usually accompanied by a lecture from an expert on a related topic, and followed by engaged activities such as a group discussion.

The sixth film, shown on 27 March 2022, was "Zero as You Are" by Miyuki Tokoi. It follows the journey of Takamasa “Sky” Kobayashi, who entered middle school officially recognized as a boy despite being born female. Kobayashi said, “Everyone else is going from zero to positive, but I’m a negative, so in order to become positive, I have to go back to zero first.” The film was followed by a talk by Yutaka Mano, Associate Professor at the Naruto University of Education, an expert in issues related to education and gender and sexual diversity in Japan.

Each film screening event has been attended by 300 to 400 participants of all ages. The first film shown in the series, on 19 March 2021, was "The Man Who Mends Women: The Story of Dr. Denis Mukwege.” This was followed a week later by a lecture by Kazuyo Hanai, Joint Representative of RITA-Congo, an organization that raises awareness on sexual violence in the Democratic Republic of the Congo and its relationship with conflict, minerals and the global economy.

One of the key objectives of this initiative is to encourage participants to take action on any of the SDGs that can be carried out locally–be it at home, school, in the workplace or community. In the past year, more than 1,000 participants have shared, over social media and email, their own pledge of actions to take following these events.

Other films shown in this initiative are as follows: "Midnight Traveler,” "School of Babel," "A Plastic Ocean," "Hiroshima Lost—A Labor of Love" and "Beautiful Islands." 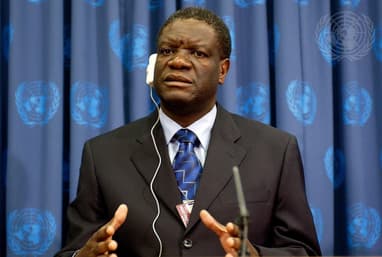 Building the Culture of Peace | Interview with Dr. Denis Mukwege